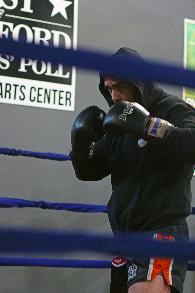 For the most part, there are a lot of similarities.  Muay Thai, American Kickboxing, and Boxing all over a great workout.  Typically, classes have a warm-up, and then they focus on partner drills, padwork, bagwork, and sparring (at the higher levels).  Some notable differences are as follows:

This style focuses on utilizing the hands.  The practitioner learns how to throw different punches.  Body mechanics are taught, and movement is key.  When you study boxing, you’ll learn a lot about how your footwork and stance can become key to either being the one doing the hitting… or being the one who is getting hit. 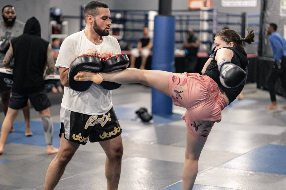 Kickboxing offer more of a full body workout, as the legs come into play at a greater level.  Where boxing offers the ability to learn how to move your legs and feet, kickboxing teaches you how to strike with your legs and feet.  The target areas for boxing and kickboxing tend to remain relatively the same.  A boxer can hit to the front of the head and face and also to the body.  Targeting for the kickboxing works in much the same way.  However, instead of utilizing only the hands in an offensive fashion, the kickboxing student can also use his or her feet to kick to the desired targets. 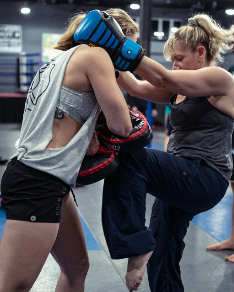 The style of Muay Thai Kickboxing incorporates all that boxing and American kickboxing does, and it adds some other elements to the equation.  Known as the “Art of Eight Limbs,” Muay Thai teaches you how to use the hands and feet, as well as your knees and elbows to strike.  This adds a significantly greater dynamic, and it adds another component to the workout you get from practicing this style, too.  Targeting also changes, in that the legs are a very predominant target in Muay Thai.  In fact, Muay Thai is very often known for the powerful leg kicks it teaches.  Adding the elbow strikes, and then also clinch work and throws, Muay Thai style kickboxing is a rather all-inclusive style of stand-up striking.  (This is why you usually see Muay Thai as the predominant style of choice for striking in Mixed Martial Arts.  MMA competitors also use other styles, like Karate, but Muay Thai tends to be the primary for most competitors.) 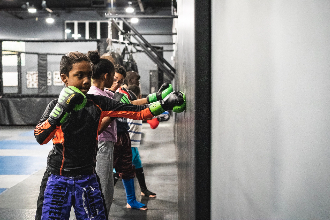 Not everybody enjoys sparring.  While we teach everybody the proper technique, which is often different from a strictly “cardio kickboxing” class, some students desire to spar, and some do not.  Sparring can be very intimidating.  So, for those folks who do desire to put their learning into practice, we are sure to offer a safe and fun environment.  This helps mitigate the risk of injury.  (All sports have a certain level of risk involved.  Surprisingly, I find the basketball takes out more of our clients to injury than boxing, kickboxing, or Muay Thai.  I think one of the reasons for this is the focus.  When you play other sports, like basketball, you are focused on the task at hand- moving the ball down the court and working with your team to score.  This means that foot placement, and potential pivot type injuries, along with contact injuries from basketball, soccer, and obviously- football, can often be pretty surprising.  However, with boxing, kickboxing, and Muay Thai, the goal is striking.  It’s done individually, not as a team, and it’s easier to focus on controlling your motions and working with your partner to learn.

Whether you enjoy boxing, kickboxing, or Muay Thai more, we offer you a healthy environment to learn and grow.  You get a great workout, and you learn a lifeskill at the same time.

We look forward to training with you!

Regular exercise is a simple solution to get you feeling good fast.

This is because every time you exercise your body increases its production of endorphins, which are responsible for that feel-good euphoria you get after a great workout or while chomping down on a piece of chocolate.

However, before you turn to chocolate and skip the gym, remember the end result of each and choose which one will help you reduce stress in the long run. (Hint: It’s not the chocolate!)