Our Student of the Month for June is Maria Bustamante! Maria has been training in Kung-Fu, Muay Thai, and Brazilian Jiu-Jitsu, and she’s been training for over two years now. 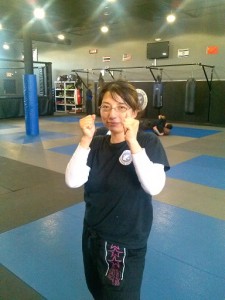 Maria originally began training because she was looking for something different and exciting to do as a hobby, so, she says, “I went for it!”

Ever since Maria began her training, she has enjoyed it. She particularly enjoys that, being a small person, she can do great things. She expressed that she really likes how she can use her size to an advantage with the martial arts, and she likes learning how to overtake a bigger attacker.

Maria says that her training keeps her “springy on her toes.” It gives her a good physical stance, and she feels like it’s fun exercise; it’s not just a workout. She says that, while she takes her workouts and training seriously, she is still able to laugh and have a good time. She particularly noted that the martial arts have opened her world up to some great relationships.  She’s met some wonderful and amazing people, and she says that she even made friends and a new workout partner at a recent seminar she attended (Emily Kwok, Valerie Worthington, and Art Keintz). Maria also noted that her martial arts training has helped her to become more confident.

Outside of the dojo, Maria enjoys going to Church and worship services and spending time with her family. (Her daughter, Micaela, currently trains at Plus One, too.)

It would be noted that this was the first time that I ever had difficulty getting a student to be our Student of the Month. When I told Maria that she had been chosen and I needed to interview her, she was a little frustrated, because she didn’t want to stop her training to do the interview!

Maria is a very hard worker. Training in Kung-Fu, Muay Thai, and Brazilian Jiu-Jitsu on a consistent basis, she is a well-rounded martial artist. She’s an incredibly hard worker, and one of her instructors (Marlene Reisler) even gave her the nickname Maria “Bust-a-Move” Bustamante. She lives up to that nickname very well!