Our student of the month for February is Corey Thomas.  Corey started training with us in 2010, but he wanted to start training in the martial arts when he was a kid.  He noted that once he found Plus One and started training… he was addicted.  (That’s what we like to hear.) 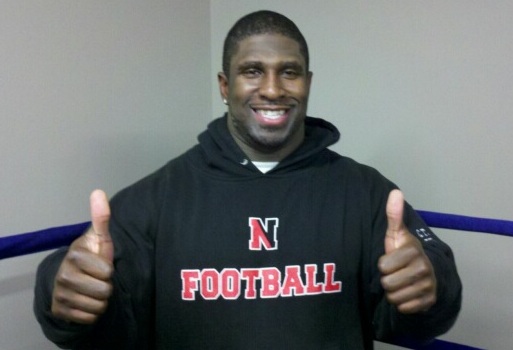 Corey’s favorite thing about the martial arts is how it relates to the outside world.  He says that people think the training makes you want to fight, but it actually makes you want to fight less. He adds that, the more control and discipline you learn in the dojo, the more you apply it outside its doors.  (Well said, and I’m glad to hear Corey feels that way.  Have you ever met Corey?  If you haven’t, he has a very muscular build.  He’s a power lifter, and he once told me that he did a competition and had three different lifts to get a maximum weight.  In just three lifts he was able to reach 1905 pounds.  Add to that his agility and flexibility, and, well… let’s just say I’m glad he’s a peaceful person!)

Corey believes that martial arts training helps him to be more well-rounded as an athlete.  (He’s a football player, too.)  He says that he sometimes prefers the Muay Thai and Brazilian Jiu-Jitsu workouts to other forms of exercise as they are lower impact, but they are just as much of a workout.  As far as core training, body control, and concentration, Corey says that martial arts training helps him improve in these areas and in his other sports and athletic activities, which include circuit training, stretching, football, power lifting, racquet ball, and hand ball.

We’re very glad that Corey is with us, and we also send a “congratulations” out to him, as he just earned his blue belt in Brazilian Jiu-Jitsu.