Our student of the month for March is Tom Sharp.  Tom is in his fourth year of study at Plus One, and he started training after having watched his kids participate in the classes. 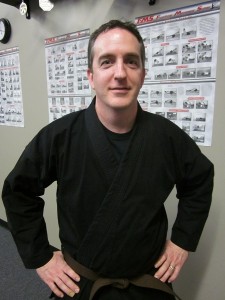 Tom enjoys how the philosophies of the martial arts can be incorporated into everyday life.  He does his absolute best in every class he takes, and he has seen health improvements from the physical training and conditioning.  He also makes note of the tremendous stress relieving benefits he obtains from his studies of the martial arts.  (Tom primarily studies Kung-Fu and Karate, but he recently began adding Brazilian Jiu-Jitsu to his regimen.)

In addition to being a student at Plus One, Tom is one of the instructors.  He primarily teaches on Saturdays, and he always seems to think “outside the box.”  His teaching methods, and his martial arts study, are open and thought-provoking.  Tom is one of the most technically oriented martial artists that I have ever met.  He wants to do things correctly, and he wants to teach the style correctly.  He tirelessly ensures that he has the details of each motion, form, and technique.  He embodies the lifelong student mentality- in that he is focused on the journey.  This mentality continues to help him to become one of the strongest practitioners we have at the dojo.

As a “Sihing” in our school, Tom portrays the role of student and instructor wonderfully.  He is currently on track to test for his black belt in August of 2013.  Interestingly enough, his daughter, whom he had originally watched in class several years ago- is continuing to work hard, too.  She is on track to test for her youth level black belt in August of 2013.  We may just have our first ever parent/child black belt candidates… and on the same test day.

The future is bright for Tom as a martial artist.  We are blessed to have him and his family as part of ours.