Our focus this month is on Ronzel Hendrix.  Ronzel is a mature and well-rounded student.  He’s been training at Plus One for a little over two years now, and he approaches his studies with fervor. 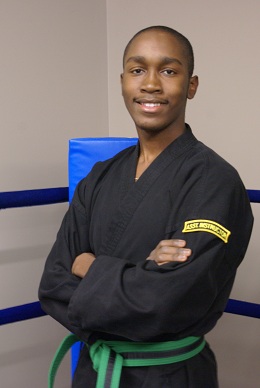 During interview, Ronzel noted that he originally started training in the art of Hapkido when he was 8 years old.  He stopped training in Hapkido after a few years, and began again with us in 2009.

Outside of the dojo Ronzel enjoys painting and photography.  He’s also active in his church.  When asked how he would make the world a better place, he responded that he would let the world know about God through martial arts and photography.

He enjoys the movement and the progression of his Kung-Fu training and likes how his body learns and adapts to the forms and the workout.  Ronzel also enjoys the friendships he has gained through training, and he noted that he has found another family at Plus One.  (Thanks Ronzel, that’s a huge compliment, and it is part of our mission.)

When asked about how Kung-Fu compares to other forms of working out, Ronzel expressed that the Kung-Fu workout is more intense than going to the gym.  He also advised that his strength has developed substantially more with Kung-Fu than with gym training.

We are very blessed to have Ronzel with us.  He is a solid student and a wonderful person.