For the December 2011 Spotlight we have chosen Thomas and Hannah Ferolano. Thomas originally joined Plus One because he wanted to learn how to defend himself. After watching her brother for several months, Hannah decided she wanted to train because 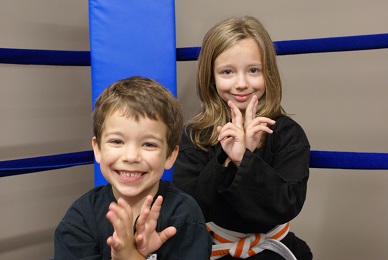 she wanted to learn self-control and obtain greater self-confidence and self-discipline.

Both Thomas and Hannah were asked about what they liked most about their training.  Thomas responded by saying he likes kicking the most, and Hannah noted that she likes everything.

Thomas, who has been training with us for one year, enjoys watching television in his spare time.  When asked about how he would make the world a better place, he responded that he would teach people how to be nice.  He said that the martial arts have helped him obtain self-control.

Hannah, who has been training with us for eight months, said that one of her favorite activities outside of the dojo is going to school.  She said that she would make the world a better place by recycling, and she noted that martial arts have definitely helped her to become more confident.

Both of these kids are excellent examples of strong and healthy children.  They are solid students at the dojo; they attend classes regularly, and they obviously practice at home… and sometimes at Home Depot! (That’s a story for a different section.)  We are super proud to have Hannah and Thomas with us at Plus One.  Keep up the great work!