For the November 2011 Spotlight we have chosen Jordan and Aidan McGee as our students of the month.  Jordan originally became inspired to train in the martial arts because of what he saw in the movies.  Aidan was excited to pursue the activity because his brother was involved. 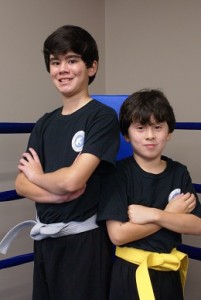 Both Aidan and Jordan enjoy participating in sports outside of the dojo, and they both enjoy computers.  Aidan is into computer animation, and Jordan likes to play video games.  (It would also be noted that Jordan is on our competition team at the dojo and recently competed in a karate point sparring tournament.)

When asked how they would make the world a better place, Aidan responded by advising that he would help the homeless, and Jordan would work toward world peace and stopping hunger.

Both McGee boys are well-rounded individuals and credit their martial arts training with helping to build their discipline and focus.