Our Student of the Month for January is Erin Otte.  Erin has been training for about four months, and she originally started training as a way to exercise and release some aggression.  (She wanted to do boxing, but we convinced her to give Muay Thai kickboxing a start.) 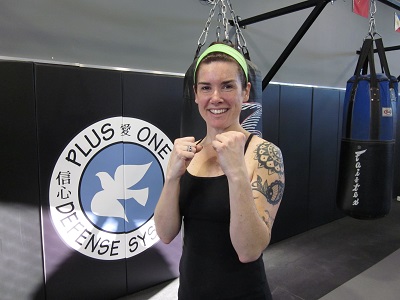 After her first session, Erin was hooked.  She was immediately attracted to Muay Thai because it used her “body and her brain.”  She says that you’re not just exercising; there’s a whole mindset and strategy behind it.

Outside of the dojo, Erin is a very proud mom of two.  (Her kids are ages seven and nine.)  She’s a hair stylist at Sugar in West Hartford.  (Sidenote, if I had any hair… I’d definitely head on over.)  Also, Erin enjoys singing. What?!  Those of us who throw gloves with her had no idea!  When not cutting hair or throwing punches and kicks, she’s often found singing rock or blues genre music.  Interestingly, she says her Muay Thai training has helped her singing.  She says the posture she has obtained with Muay Thai helps her here, and she also says that her stamina behind the styling chair with her clients has improved as a result of her training.

A family oriented person, Erin also expressed that she likes that she has a family at Plus One.  She says it’s a community, and she feels like she can come in when she is really stressed out or having a bad day.  She loves the seriousness of the training atmosphere and that we “always have her back.”  We make sure she is training correctly, and she gets to have fun and relieve some stress at the same time.

Lastly, I asked Erin to compare her Muay Thai workout to other forms of exercise.  She responded by saying that Muay Thai is holistic; it’s a balance of self-defense and core work.  As a woman, she says it’s very helpful.  She likes the fact that she trains with other women and with men, too.  She likes that they all work together.  She says the expectations with the training are realistic, and you get to workout in an atmosphere that creates confidence.

Erin, you are a wonderful person.  You bring a lot of energy and enthusiasm to your training.  You are doing an amazing job, and it’s an absolute pleasure to have you with us!