Our Student of the Month for March is… Chris Torres!  Chris first started training so that he could lose some weight, and he successfully lost 115 pounds in his first two years of training!  (That’s incredibly awesome, by the way.  Nice work.) 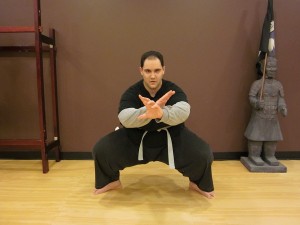 Chris has been training for eleven years now.  About one and a half years ago he moved into the area, and he started training with us at Plus One.  He says he likes the “one on one” challenge that martial arts training provides, and he really enjoys sparring in the HITS class and the Muay Thai classes.  (The HITS class is a point sparring/tournament class, and the Muay Thai classes provide sparring in a continuous fashion.)  Chris adds that sparring is like a chess game that involves your mind AND your body.

Chris is a self-confessed “tech geek” who enjoys playing with his son, Xander.  (His son just turned two months old and rocks the “Plus Onesie” that Marlene made for him quite well.  He is outgrowing it, though, so we may have to get Xander a gi soon.)  Chris really enjoys hanging out with his wife, and he also likes going to movies and playing the guitar.

In our interview, Chris talked about how the martial arts help him keep calm and keep a level head.  He says that the training has pretty much improved everything in his life.  He even notes that his immune system has improved because of his training, and that he has gained so much more from the martial arts than most people realize you can gain from doing it.

When asked about how martial arts training compares to other athletic or sports activities, Chris said that, “You gain strength and agility from other sports, but there is a balance to the way that martial arts effects your body.”  He also expressed that, while there is a teamwork component with the martial arts, the training is more about a personal challenge.  He noted that he appreciates the great bond that is created between training partners and says you can develop some pretty wonderful relationships with others in class, too.

At the conclusion of our interview, Chris had a question for me.  He asked, “Why did you choose me for the student of the month?”  Every student who gets chosen has at least a few things in common.   They are dedicated students who come to class regularly, and they also have a number of really positive character traits.  Specifically with Chris, he is an amazing martial artist, and he is really humble about it.  With over a decade of experience, Chris is quite accomplished and his skills are rather honed.  When he comes to class, though, he is simply there to learn, have fun, and share this fun with others.  (This is rare to find when people have been training for a long time.  Often, they will get conceited and develop rather large egos.  This is not so with Chris.)  He is also always willing to help with others in class.  He enjoys helping people learn.