Our Student of the Month for November is Josh Wright.  Josh has been training with us for just over six months.  He originally started training in the martial arts because he wanted to become a part of something that was bigger than himself, 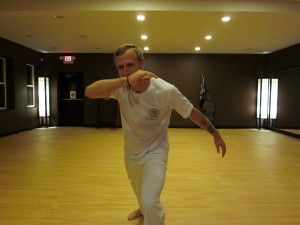 and he wanted to be in a position where he could focus on learning something new.  He admits to having known absolutely nothing about the martial arts when he started, but now, he is hooked on Capoeira!  The art of Capoeira attracted him because it’s “all about momentum.”  He also enjoys learning the Português language, which is used a lot in class.

What’s his favorite thing about martial arts training? Respect.  He enjoys the respect that is involved in training and the integrity of the environment.  Josh also says that training in the martial arts makes sense.  The lessons you learn apply to your whole life, not just class.  (Many books have been written in relation to this topic, by the way.)  Josh likes the cohesive training atmosphere, and he utilizes his training in his everyday living.  He says training in Capoeira has been one of the best experiences he’s had in life.

Outside of the dojo, Josh is a student, studying biology, at Central Connecticut State University.   He’s just about done with his Bachelor’s degree.  When he’s not training in Capoeira, Josh enjoys spending time with his girlfriend and his family.  He also enjoys studying and working or volunteering for chiropractors in the area.  Josh also plays the guitar from time-to-time.

Overall, Josh explains that his martial arts training, compared to other activities one could choose to do… is personal.  It’s a personal challenge.  It’s fun, and it’s a commitment you make to yourself, more than anything. Josh says his training has helped him grow into the next stage of his adult life.

Josh, we are privileged to have you with us.  Obrigado para treinar com nossos! (Thanks for training with us!)