Our Student of the Month for November is Elias Morales.  Elias has always been drawn to the martial arts, and he started training when he was around 6 or 7 years old. 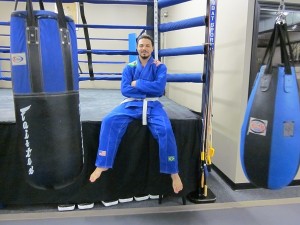 He used to watch martial arts movies with his dad, and he also enjoyed watching the Power Rangers.  (He remembers wanting to be a Power Ranger when he was a kid.)

Now, a couple of decades later, Elias is not only drawn to the martial arts, but he is drawn to sharing his knowledge of the arts with others.  He notes that he started in Tang Soo Do (a Korean martial art) when he was a kid, and that he had a lot of anger issues, specifically through his teen years.  His instructor was able to really help him through that time in his life, and he believes the arts have helped him ever since.  Now, he feels like it’s his turn to give back.

As a white belt in Brazilian Jiu-Jitsu, Elias recently started the “White Belt Club” at Plus One Defense Systems (which meets on Thursdays at 7:30pm).  Elias expressed that he loves coming to Plus One, and he notes that he is dedicated to reaching his career goal of becoming a martial arts instructor.  With this goal in mind, and his deep desire to help people, Elias felt that bringing the White Belt Club into being would be a great way for white belts in Brazilian Jiu-Jitsu to help each other by reviewing and drilling techniques that have been taught in class during a given week.  The camaraderie amongst this group, as it is being lead by Elias, is already noticeable.

Lastly, I asked Elias what advice he would offer to somebody who was thinking of starting to train.  He advised that people can benefit from martial arts training a lot.  He encourages people to train for the mental health benefits, stress relief, and physical health benefits.

I have known Elias for some time now, and I am very glad he is with us at Plus One!