Our student of the month for May is CJ.  Originally starting in our home school program, CJ has been training with us for over four years, and he is making his way nicely through the youth Kung-Fu curriculum. 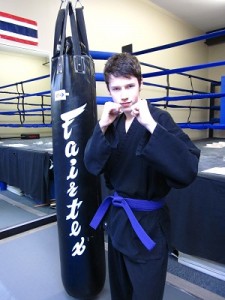 CJ originally started taking the martial arts after having played baseball and soccer for a while.  He thought that martial arts training would be cool.  It seemed like a good activity, and the material seemed like something he wanted to learn.  Now, well into his training, CJ finds that the martial arts are fun, and they are useful in that the arts aid in his physical development and help him to build strong character.  He also expressed that the martial arts training is helping him grow into a more confident person.  Overall, CJ advised that he really likes the Kung-Fu and Karate training- specifically he enjoys the forms and patterned motion involved.  He says he gets a cool feeling when progressing through the movements, along with a feeling of achievement when he moves to his next belt level.  (CJ earned his youth purple belt this last week.)

Lastly, it would be noted that CJ was chosen as our Student of the Month this month because of his dedication and hard work.  He is a very humble person; he is always willing to help in class, and he continually seeks out ways to make a positive impact on others while in class.  He’s one of those guys who consistently works hard, and he never complains.  He just does what he needs to do.  This is a personality trait not often found.  It is serving him well in his martial arts training, and it will serve him well throughout his life.  CJ- keep up the great work… on and off the mat.  We are very proud to have you with us!