Our Student of the Month for July is Dallas Sherman.  Dallas started training in the martial arts when he was a kid.  As an adult, it was something he wanted to do again, and his wife (Jennifer) got him martial arts lessons as an anniversary gift back in 2008. 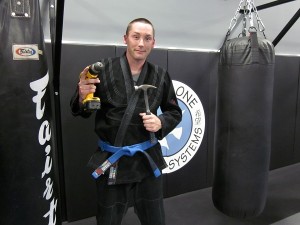 When asked about how the martial arts have had a positive impact on his life, Dallas advised that they have helped to calm him down.  He has learned many different coping mechanisms, and he has learned better ways of reacting to things with patience.  He says the training has also helped him to become more optimistic.  He says that training for him is a personal goal.  You can make yourself the best you can be, and the martial arts training you receive cannot be taken away from you.

A Navy veteran, Dallas takes solace in the fact that he can defend himself and his family.  When not training, he enjoys spending time with Jennifer and Gavin (his wife and son).  He also enjoys, hunting, fishing , and the outdoors.

Dallas is a full-time instructor at Plus One, and he has been invaluable over the last several weeks.  His skills as a teacher are highly recognized.  However, not everybody is aware that Dallas is a highly skilled contractor.  His willingness to selflessly put those skills into action recently is noteworthy.  He has spent much of his own time (and even his own money) to help get the new building functioning at the level it is.  He is a true martial artist, and he is a truly nice guy who will give you the shirt off his back… or in our case… the hammer off his tool belt.  Thank you, Dallas!