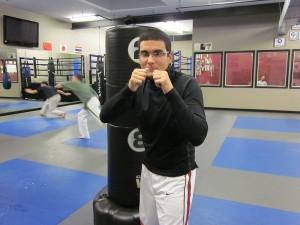 Mike is now addicted to training.  He has been with us for eight months.  He trains five or six days a week, and when he’s not training, he says he watching youtube videos about training, taking notes, or watching the martial arts on television.  (He specifically likes watching the UFC.)

Mike says that, when he is training, he forgets about the problems of everyday life.  He feels like he’s part of the family at Plus One, and all his stress goes away.  When he trains, Mike expressed that he is able to focus on what he is doing 100%.  He really likes that, and he’s excited that he now has self-defense skills.

Outside of the dojo, Mike likes salsa dancing, and he also likes playing golf.  (Although, he says he hasn’t had much time to play golf since he started his martial arts training!)

It’s an absolute pleasure to have Mike with us.  He is one of those quiet, humble guys who is always willing to help others.  Thanks, Mike.  Keep up the great work!

2 thoughts on “Student of the Month”