Our student of the month for September is Quintin!  He trains in Kung-Fu, Muay Thai style kickboxing, and in Brazilian Jiu-Jitsu.  He has been training for ten months, and he really enjoys cross-training in these three martial disciplines. 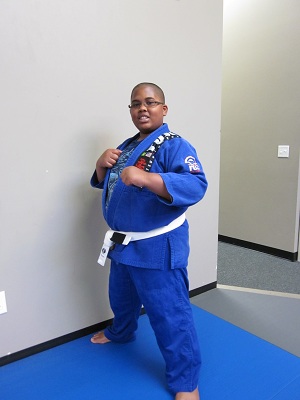 Quintin originally started training because he wanted to defend himself… against his sister.  (Yup, this was a fun interview!)  He also wanted to train because his mom is a student with us.  (Raquel, his mom, is one of our more dedicated students.  She trains in Kung-Fu and Brazilian Jiu-Jitsu.)

When asked what he liked best about the styles he studies, Quintin responded that he enjoys being in the ring with Muay Thai; he enjoys the defensive movements of Kung-Fu, and he likes how Brazilian Jiu-Jitsu focuses on defending yourself while you are on the ground.  He also really likes the sparring, or “rolling,” that occurs in the Brazilian Jiu-Jitsu classes.

When asked how he would make the world a better place, if he was able to, he expressed that he would put an end to violence and crime.  Subsequently, Quintin noted that he used to get bullied and picked on, but that the martial arts has really helped diminish the bullying.  Quintin said that he didn’t understand why people were violent with each other, and he would make everybody happy in the world if he could.  (I believe that, too.  Quintin is a really nice young man.  We are blessed to have him as a part of our team.)