Our student of the month is… David Wolpaw!  “Doctor Dave” (who is local area physician) has been training in the martial arts for many years now.  (He first started in 2004, and he began training with us in 2010.) 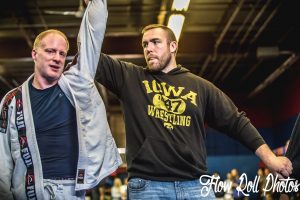 Dr. Dave was chosen as our Student of the Month this round because of his overall training ethic and willingness to help others.  As a husband, parent of wonderful kids (who are also great martial artists), and a physician, Dave has a lot to balance in life.   He works that balance very well; he usually trains three or four times a week, and he is an inspiration to others.

Dave is also the first “Student of the Month” we’ve had who completed his own write-up.

Dave teaches the 6:30am Brazilian Jiu-Jitsu class on Friday mornings at Plus One.  I came in around 7:15am this last Friday and told Dave that I had chosen him as the Student of the Month.  He said he was honored, and I asked him to cut his training a little short that morning so that we could conduct his interview, and I could write his story.  I then went to my office to get some work done, and Dave came up at 8:00am.  He was too busy training, and he “forgot” that he needed to do the interview, and now he needed to go.  For the record… Dave… I know that “forgot” really means, “I’m honored to be chosen as the Student of the Month, but I’m not going to miss any of my workout to do the interview.”  In some ways, this solidifies my choice for Student of the Month.  😉

Anyhow, I sent the interview questions to Dr. Dave, just expecting some bullet point answers, but he made my life easier and completed the write-up found below.

Thanks for all you do, Dr. Dave!  It’s a pleasure to have you with us as both a student and a teacher at Plus One!

I wasn’t much of an athlete growing up and never excelled at the sports that most kids play- like baseball or soccer.  I’ve been interested in the martial arts for many years but started training seriously in 2004.  Brazilian Jiu Jitsu (BJJ) caught my attention when I saw Royce Gracie destroy bigger and stronger martial artists in the early days of the UFC.  This is a common story BJJ practitioners will tell you about how they got into the sport.

As a kid, I got into school yard fights now and then when I was in situations where I had to defend myself.  Like most kids, I never knew what I was doing.  I just swung for the fences.  Sometimes it worked and sometimes it didn’t.  And like any skill, self-defense is something that you need to train to do if you want to do it right. But unlike other sports, which people do for fun or fitness, I think martial arts training is something that everybody should do at some point in their lives just so they know how to defend themselves.

I love so many things about BJJ.  It’s a great form of self defense.  It’s athletic.  It’s meditative.  One of the things that sets BJJ apart from other martial arts is the emphasis on sparring. This makes the sport a lot of fun and also makes you really learn how to do the techniques effectively, since you have to execute them against resisting opponents.  I also love BJJ because it’s an escape from the real world — when you have a 250 pound skilled BJJ player on top of you trying to choke you unconscious, you have to deal with the problem at hand.  You totally forget about things like your bills, that leaky roof, and your boss at work. When it’s over, win or lose, you shake hands with your training partner.  And after you’ve spent an hour sparring, the rest of the day doesn’t seem so hard.

People ask me if Brazilian Jiu-Jitsu gives you a good work out.  The answer is yes and no.  If you are new and don’t know what you’re doing, it’s a great work out.  We can take a world class marathon runner and totally exhaust him within 10 minutes.  But once you learn what to do and how to conserve your energy, you can relax and it’s almost like taking a stroll in the park. Then you can have fun with it and focus on the art and not just surviving.

Another great thing about BJJ is the variety of people you see who train… every ethnic group, a wide range of ages, every profession you can imagine, every income level.  We’re all there for the same reason and enjoying the sport. You slap hands and start to spar and it really doesn’t matter a wit if you’re a CEO making a million dollars a year and the other guy is a blue collar worker who won’t make that in a lifetime.  You are equals on the mat.

Recently, I competed in the New England Submission Challenge and did well.  [Editor’s note: Dave is being humble here.  He submitted all of his opponents and won 1st place in two different divisions.  Way to go, Dr. Dave!]  I had trained for many years with people who had competed and I wanted to try it out for myself.  I’m glad I did and I may do it again at some point.  Competing in some ways is just like sparring, which I do every day.  But I definitely felt the intensity and pressure to win more than ever before.  I would highly recommend that anyone who trains in BJJ try competing at least once so they know what it feels like.

When not training at Plus One, I work as a Family Practitioner in Manchester.  The rest of my time I spend with my family.  I am married to an amazing woman and we have four daughters.  I’ve gotten each of them involved with martial arts, with an emphasis on self defense.  I strongly believe this is a basic life skill akin to learning to read or to swim.