Our student of the month for March is Alex Rodriguez. Alex recently had a belt rack tattooed on his chest. This basically cemented his nomination for March. 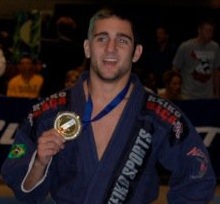 Alex originally wanted to become involved with the martial arts when he was in middle school. He was a smaller guy, and he used to get bullied. So, he wanted to learn how to defend himself. However, he was distracted (specifically by skateboards) and he didn’t start training seriously until he was an adult.

Alex really enjoys training in Muay Thai Kickboxing, Brazilian Jiu-Jitsu, and Mixed Martial Arts. He is also considering becoming involved in the Kung-Fu and Karate classes. He says that, no matter how you feel, when you come to the dojo- you get all the stress out. In Alex’s words, “Even if it takes you getting scraped across the mat by brown and black belts, you can leave with everything [stress] lifted off of your shoulders.”

He says that martial arts, specifically BJJ (Brazilian Jiu-Jitsu), offers a full-body workout. Alex enjoys that you are always moving and trying to perfect a new technique. (He likes this about Muay Thai, too.) He says that, with BJJ, he can roll for hours, and he feels great afterwards. With Muay Thai, he likes the cardio, and he says he can’t even stand-up when he’s done. (I guess that’s when he’s glad he knows BJJ!)

On another note, Alex sees some over-arching applications between the study of martial arts and the betterment of his life. He expressed that the arts have helped him learn respect, discipline, and confidence. He says that, “If you don’t believe you can do something, you’ll never be able to do it. But, if you go into something telling yourself it’s going to happen… it may take a while… but it will happen eventually, and you will meet your goals – inside and outside the dojo.”

When not at the dojo, Alex enjoys spending time with his family and friends. He says his friends mean a lot to him, and he enjoys going to concerts, restaurants, conventions, and playing video games with them. Also, whenever he is able to, he enjoys skateboarding and snowboarding. In fact, Alex expressed that the break falls he has learned in BJJ have helped to save him a lot when he is skateboarding. When he falls down, he falls correctly, gets up on base, and he just keeps going.

It’s a true pleasure to have Alex Rodriguez with us at Plus One. He always brings a great attitude to his training. He is helpful, courteous, and kind. A solid martial artist, we look forward to training with him in the years to come!